I want an offer

Description of the procedure and the resulting effect

A veneer, which can be imagined as such a thin sheath, is a thin lamella made of dental porcelain, which can be used to change the shape and colour of teeth, to close gaps between teeth (diastema, tremata formation), to cover stains caused by hypoplasia, hypomineralisation of enamel or when tetracycline antibiotics are administered in childhood, so-called tetracycline teeth.

A crown  is made in the laboratory and is an artificial replacement of the original dental crown .   The most common reason for making and using a crown is the massive loss of the original dental crown, which no longer allows to solve the defect by a filling.  There are several types with different quality and especially aesthetics.   We will recommend a suitable type of crown during the online consultation and specify it in a personal consultation before the intervention.

A fixed bridge  replaces a group of lost teeth, or it can replace an entire dental arch with a toothless jaw.   It varies in size depending on the number of teeth to be replaced.  It consists of artificial crowns, which are supported by implants, and of connectors, which link these artificial crowns to each other to prevent them from resting on the implants.   Short bridges (e.g. 3-membered ones) are usually glued with cement, large bridges are more often connected with screws.  In both cases, these are fixed prostheses that the patient cannot remove. 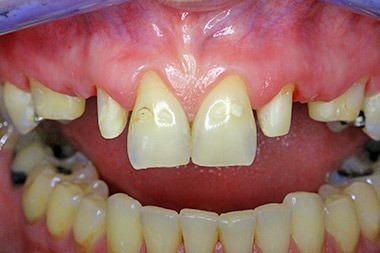 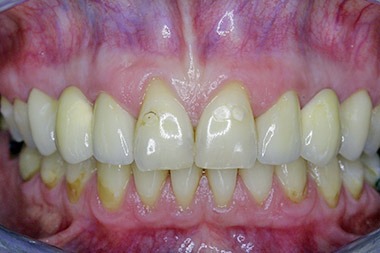 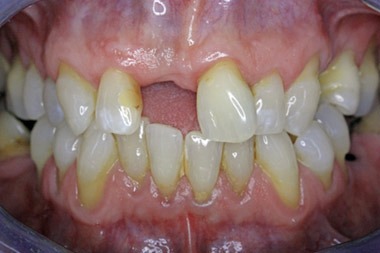 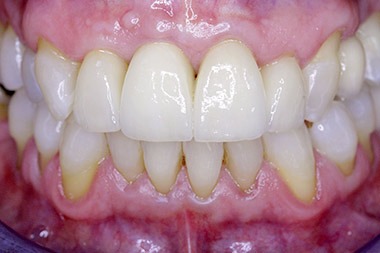 Description of the procedure and the resulting effect

It starts with the preparation – filing the teeth during the first visit, when we will make temporary veneers / crowns, which exactly copy the shape and position of the teeth, protect the teeth, and are shaped precisely around the gums. This means that you leave the surgery with temporary teeth and you can bite, talk, smile. All this takes place during one visit to the clinic taking 2 hours.

The next step is 7-10 days of work in the dental laboratory, which does not require the presence of the patient in Prague  and either veneers or crowns or a bridge are made.  We strive to save as much healthy tooth material as possible, which is why we make ultra-thin porcelain veneers (approx. 0.3–0.5 mm thick), which require only minimal filing of the original teeth.   Such veneers are very aesthetic because they closely resemble teeth in appearance and degree of transparency.  In the case of extensive tooth damage or the presence of large fillings, a porcelain crown is made, the procedure is the same as for the veneer.

After placing the dental prosthesis, you can immediately bite and enjoy a new smile.

Frequently asked questions about the procedure

How is a veneer applied?

The first step is to visit a dentist, who will thoroughly examine the condition of your teeth and during the consultation you will agree on the next step. First, a thin layer of tooth enamel is removed, the tooth is imprinted or scanned. This will then be used for the production of permanent veneers. Until the veneer is ready, a temporary veneer will be glued on the tooth and removed on your next visit. The tooth is then thoroughly cleaned and prepared for gluing a permanent veneer. The resulting effect is not only aesthetic, but also permanent. The whole procedure is painless.

How long will dental veneers, crowns, or bridges last?

This is, of course, individual and depends on many factors, but with proper care, their lifespan is virtually unlimited.

How long does it take to make a veneer / crown / bridge?

About one week to 10 days. For an additional fee, it is possible to speed up the entire preparation and the whole intervention can take place within a few days and you do not have to leave and return to Prague.

Is my presence necessary during the production of a dental prosthesis in Prague?